Edit
This article is about the book, volume two of The Book of Dust trilogy. You may be looking for the secret commonwealth, the idea introduced in the book.

Warning! This article contains information from The Secret Commonwealth.
Read with caution to avoid spoilers.

The Secret Commonwealth[1] is the second novel in The Book of Dust trilogy and was released on 3 October, 2019.[2] It was set twenty years after the events of La Belle Sauvage, and roughly ten years after the events of the His Dark Materials trilogy. It features Lyra Silvertongue as a twenty-year-old undergraduate,[3] travelling to Central Asia via the Levant.[4] Lyra investigates a murder case with Malcolm Polstead.[5] In search of a town haunted by dæmons and the mystery behind Dust, Lyra faces adult concerns and new complexities in her relationship with Pantalaimon.[6] She also escapes Oxford for the third time by boat, the Maid of Portugal, accompanied by the old gyptian Giorgio Brabandt into the safety of the Fens.[7]

Following an auction to raise money for the victims of the Grenfell Tower fire, Pullman confirmed that he would name a character in The Secret Commonwealth after Nur Huda El-Wahab, a victim of the fire.[8] Pullman had already written the book before the auction took place, so he went back and added Nur Hada el-Wahabi as a character who will make an appearance in this book but will play a bigger role in the third book.[9]

The book is seen from several different viewpoints: Lyra (student at St. Sophia’s College), Malcolm (now an academic), Pantalaimon and the Magisterium. The book follows several events in different locations (including Constantinople, Prague, Smyrna and Wittenberg) as well as organisations (the Magisterium, La Maison Juste and the brotherhood of the holy purpose) and several other minor characters (Simon Talbot and Gottfried Brande).

Lyra's relationship with Pan having become increasingly strained, things come to a head when Pan witnesses the murder of Roderick Hassall. She is forced to move by Werner Hammond, the new Master of Jordan College, and protects Hassall's belongings from the Magisterium agents who ransack her rooms. Hassall had been involved in research into a specific type of rose grown in the Karamakan desert; the industry surrounding these roses is under threat by mysterious 'men from the mountains'.

After a bitter argument, Pan leaves in search of Lyra's 'imagination'. Lyra, whose protections against the Magisterium are being systematically dismantled, flees Oxford with the help of Giorgio Brabandt, the grandfather of her ex-boyfriend Dick Orchard. Protected by the gyptians, Lyra speaks to Coram van Texel for advice and is given a little stick to defend herself. When the CCD enter the Fens to search for Lyra, she is forced to leave and begins her travels east in search of answers.

Malcolm, now an academic and acting for Oakley Street, also travels east to search for Lyra and to investigate the growing unrest.

Marcel Delamare, Marisa Coulter’s younger brother, is behind the Geneva-based organisation called La Maison Juste and thus much of the growing threat to Lyra. Olivier Bonneville, the son of Gerard Bonneville, is tasked by Delamare with finding Lyra. Bonneville, using the nauseating new method of reading the alethiometer, realises that Lyra and Pan are separated.

Malcolm poses as a journalist in Geneva, and interviews Simon Talbot, the author behind one of the books Lyra and Pan had been disputing over. Malcolm escapes the city after a warning from Mehrzad Karimov that Delamare is after him.

Pan arrives in Wittenberg to confront novelist Gottfried Brande, who is likewise responsible in his eyes for the change in Lyra, but is largely ignored. He is captured by Bonneville, who is in turn captured by the CCD, but manages to escape. After meeting refugee Nur Huda el-Wahabi, he begins to travel to the Blue Hotel.

Following a confusing experience in Prague with an experimental philosopher, Lyra travels east to Constantinople and then to Smyrna. Delamare consolidates his power and Malcolm continues his investigations, learning about Delamare’s background, intentions and interests in the rose industry from Bonneville. He witnesses the hijacking of a meeting of rose farmers and helps to diffuse the situation by killing their leader. He then narrowly misses catching up with Lyra, who has been disguised with the help of Bud and Anita Schlesinger.

Bud takes Malcolm to meet Ted Cartwright, who tells them he had escaped from the destruction of the Tashbulak botanical research station. Malcolm is shot by a nurse, in the pay of Thuringia Potash, who kills Ted before he can reveal more. Anita’s investigations into TP, a pharmaceutical company seemingly linked with 'men from the mountains', has resulted in the firebombing of their apartment. Malcolm boards a train for Aleppo and discusses the poem Jahan and Rukhsana with Asta. The train slows for an important passenger to board and Malcolm is later found unconscious in a pool of blood.

On her train, Lyra is given a myriorama by a kindly old man, who warns her of trouble. She is later sexually assaulted by soldiers on the way to Seleukeia. Once arrived, she is offered hospitality by Chil-du and Yozdah, poor Tajiks whose dæmons have been sold. A priest reluctantly directs her to the Park Hotel, where dæmon sellers approach her. She engages Abdel Ionides to be her guide to the Blue Hotel.

Back in Oxford, Alice Lonsdale is arrested by the CCD. Janet, a secretary at Jordan, witnesses the arrest and informs Brenda Polstead; together they travel to Hannah Relf’s house and successfully defend her from several agents.

Outside the Blue Hotel, Bonneville, poised with a rifle, is prevented from shooting Lyra by Ionides with the promise of a treasure 3000 miles further east. Lyra is greeted by Nur Huda at the entrance to the ruined city. 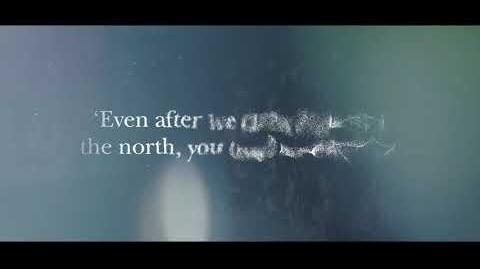 "It used to be you who was impulsive," said Pan, "and me who kept holding you back. We’re different now."

She nodded. "Well, you know, things change… This isn't just shoplifting. This is murder."

"And maybe by doing this we'd be helping the murderer get away with it. By interfering with the investigation. That can't be right."

"That's another thing," he said.

She knew he was right, but it wasn't right that he should speak to her accusingly, as if it was something to blame her for.

"I used to be young," was all she could find to say.

He made no response.

They didn't speak again till they reached the station. Then she said: "Pan, come here," and he leapt up at once into her hands. She put him on her shoulder and said quietly, "You're going to have to look out behind. Someone might be watching."[12]

HDM Wiki has 38 images from The Secret Commonwealth.