Edit
This article is about the second episode in Series 2 of the TV series. You may be looking for the Cave, a computer which Mary Malone used to speak to Shadow-particles.

The City of Magpies

In this episode, Lyra Silvertongue and William Parry travels to Will's Oxford in order to search for answers.[2]

In Cittàgazze, Will tells Lyra that he need to go and see Elaine Parry's lawyer while Lyra tries on a variety of clothes in order to blend in in his world and he gives her a bag to put Pan in. After showing her the window, they go through to Oxford and Lyra immediately gets hit by a car although she remains relatively unharmed. Charles Latrom sees them from his car on the side of the road.

In Oxford, Lyra looks round in wonder before seeing a tower she recognises as being near Jordan College. She runs towards it but finds, on the other side, a construction site and realises that there isn't a Jordan in Will's Oxford. At the Magisterium, various officials gather for the funeral of Cardinal Sturrock. Hugh MacPhail, who is acting cardinal, tells them that the witches will be brought to account.

Meanwhile, Will treats the small cut on Lyra's knee and she asks him what a mobile phone is. Lyra tells him that she has something similar (in that it tells things): the alethiometer. She tells him that she found out, through it, that he is a murderer but he tells her to stop talking. Will then tells her that he needs to go and see his mother and tells her to meet him at the Botanic Gardens at 5pm.

While walking down the street, Lyra sees a poster advertising a display on the North at the Pitt-Rivers Museum and goes there. She takes out the alethiometer and finds out that, to find out more about Dust, she must find a specific scholar at St Peter's. She then explores the museum and sees trepanned skulls before talking to Charles Latrom about them who sees her using the alethiometer. Will goes to see his mother and finds her and Mr Hanway getting on well together.

Serafina Pekkala asks Ruta Skadi about her decision to kill Sturrock and she says that he was a terrible man. Serafina tells her that she has sent Martin Lanselius to them to try and clear the mess up but Ruta insists that she was protecting the prophecy. Lyra finds the scholar, Mary Malone, and tells her about herself to which Mary is taken aback.

At the back of the court in the Magisterium, Marisa Coulter talks to Carlo Boreal about her child. Dr Lanselius is brought before them and Father Graves accuses him and the witches of being wicked beings. MacPhail decrees that he should be arrested. At the meeting with his mother's lawyer, Will is told that he can't take money out of the fund his father left without permission from a variety of people, including his grandparents.

Lyra and Mary agree to answer each other's questions and Mary tells her about the Cave and her discovery about dark matter and its properties. In return, Lyra shows Mary her alethiometer and correctly answers a question that she couldn't know: what Mary did before being a physicist (she was a nun).

Will meets his grandfather and grandmother at their house and they talk about his mother. Graham goes and phones Inspector Walters to alert him that Will is at his house and Willl, after distracting his grandmother, escapes.

Lyra has a go at using the Cave and manages to make intricate patterns appear on there which tell her that the dark matter is her Dust and that Mary has something imporant to do (with the I Ching) and also that she needs to meet Will at the Botanic Gardens. Marisa tells MacPhail that he needs to make a large action to secure his place as Cardinal and to compete with Graves.

Will scolds Lyra for being late and Lyra tells him that she needs to help him find his father who she reveals is alive. They sit on a bench and Lyra, using the alethiometer which she tells Will about, proves to him that the alethiometer can tell the truth and therefore that his father is alive.

Later, Mary tells her colleague Oliver Payne about the girl but he reminds her that they need money as they are running out of funds. In his bedroom, MacPhail is told that the men are ready as the council has approved something which he needs to sign. In penance, he places his hand above the flame of a candle. Marisa visits Thorold who tells her that Lyra followed Lord Asriel to the window in the North and Marisa realises that she is in another world.

On zeppelins, bombs are readied and, after the Magisterium approve of the actions, they let the bombs go upon the land of the witches to Serafina's horror. Upon his promotion to Cardinal, Marisa goes to MacPhail and tells him that she is going in search of her daughter, Lyra.[3]

"The Cave" is, unlike many of the episodes in Series 2, not a chapter in The Subtle Knife but refers to the Cave, an instrument used by Mary Malone. 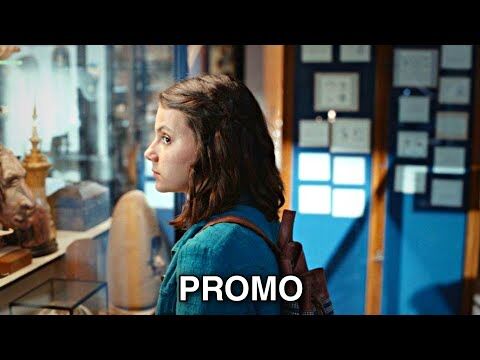