"They will chase you beyond the ends of the earth..."
—Official tagline[src]

Northern Lights, published as The Golden Compass in Northern America and certains others countries, is the first novel in the His Dark Materials fantasy trilogy by the British writer Philip Pullman. First published in 1995, the novel won the Carnegie Medal, and other prizes and awards, for children's fiction in the UK in 1995.[2]

This quote precedes the table of contents as well as the title page of the book. It provides the source of the series title His Dark Materials.

The story is divided into three parts, the first, 'Oxford', opening with eleven-year-old orphan Lyra Belacqua hiding in the Retiring Room in Jordan College. Early on it becomes clear that Lyra's Oxford is not the Oxford of our world, but a world in which history has taken a number of alternate routes leading to subtle changes, for example use of the word 'anbaric' instead of 'electric', but also unfamiliar peculiarities, for example a unique species of polar bear having developed opposable thumbs, sentience and a rich cultural tradition on the remote archipelago of Svalbard. Most unique and important to the story is that in Lyra's world, every human person has an animal familiar called a dæmon which is an external manifestation of their soul. Lyra's dæmon, Pantalaimon, can change shape as all children's can. Adults, such as Lord Asriel and the Master of Jordan College, have dæmons whose form has settled, best exemplifying some part of the person's character (Asriel has Stelmaria, an independent and powerful snow-leopard-dæmon, and the Master has an old raven-dæmon).

Lyra lives at Jordan College and spends her time half-wild, half-civilized, happy and carefree with her friend, Roger Parslow, a kitchen boy — they roam around the streets of Oxford, waging 'wars' with the children of other colleges (usually young servants and the children of servants), as well as the brick-burners' children and the children of the gyptians. Soon, life takes a serious turn when she and Pantalaimon prevent an assassination attempt on Lord Asriel and also overhear a secret conversation about Dust, a mysterious entity. Around this time, word is spreading about children mysteriously disappearing, leading to the urban legend of Gobblers. The character of Marisa Coulter and her malicious monkey-dæmon are introduced as being responsible. Lyra is then introduced to Mrs Coulter in formal terms by the Master and is offered the opportunity to leave Oxford to become Mrs Coulter's assistant. Before Lyra leaves, the Master gives her an alethiometer, meaning 'truth-measure', and bids she keep it private. As Lyra departs Jordan, she realizes that Roger has gone missing.

In London, Mrs Coulter shows Lyra a glamorous lifestyle and begins her tutorship in learning about the North, and everything is so new to Lyra that she soon begins forgetting about Roger amid the distractions Mrs Coulter offers her. Pantalaimon warns Lyra that Mrs Coulter is treating her like a pet. As autumn changes to winter, Mrs Coulter decides to hold a cocktail party, however Lyra and she have a confrontation and the Golden monkey physically assaults Pantalaimon. Mrs Coulter is so dismissive of the disagreement that Lyra is left feeling dejected and rebellious, and during the party she discovers that Mrs Coulter is the chair of the General Oblation Board of London — the Gobblers — and are responsible for the missing children across England. Lyra packs a bag and runs away through the streets of London however soon gets lost. In a canal basin she is captured by some Turk traders who throw nets over her, however she is rescued by some passing gyptians, who take her onto their boat. Lyra recognizes them as the Costa family, whom she once attempted to sink the boat of during her battles with the other children of Oxford, but finds their matriarch (Ma Costa) forgiving of her past crimes. Lyra stays with the Costas as they move along the Grand Junction Canal and they make their way towards the Fens where the gyptian families are meeting with their leader John Faa to discuss the lost children. There, Lyra learns that her parents are none other than Lord Asriel and Marisa Coulter, and the gyptians conclude that they must travel north in a boat and rescue the children. Lyra insists that she goes along with them. Initially discouraged from the venture, Lyra proves herself to John Faa and Farder Coram by reading the alethiometer and accidentally predicting the deaths of a team of gyptian spies who infiltrated the Ministry of Theology and predicting the coming of Mrs Coulter's spy-flies. Farder Coram solders a captured spy-fly into a leaf-tin and Lyra keeps it. There ends part one of the story.

Part two, 'Bolvangar' begins with the gyptians arriving in the port town of Trollesund where Farder Coram and Lyra meet with the Witch-Consul Martin Lanselius. Lanselius puts Lyra's growing skill with the alethiometer to a test and discovers that she is a child spoken of by Witch-prophecy, however keeps it between himself and Farder Coram, though Lyra listens in without them knowing. Lanselius also tells of an armoured bear who has been removed of his armour by the townspeople and who is working nearby — the exiled King of Svalbard, Iorek Byrnison. During their stay in Trollesund Lyra also meets Lee Scoresby, who owns an air balloon and agrees to help the gyptians, and Kaisa, the goose-dæmon of Serafina Pekkala, clan-queen of the witches of Lake Enara. As the story progresses, the human-dæmon relationship is illustrated through Lyra's journey, for example it is taboo to touch another's dæmon, and is inadvisable to travel too far from your dæmon (though witches can). She also learns that a Bear's armour is akin to a person's dæmon, and so Lyra helps Iorek reclaim his armour and Iorek joins the quest. As the gyptians make their way inland towards Bolvangar, Lyra receives a strange message from the alethiometer that confuses her, and asks Iorek to take her to the nearby village where, it appears, there is a ghost. There they find Tony Makarios, a child who has been severed from his dæmon. They take him back to the gyptian camp, but he later dies.

The encampment is then attacked by Samoyed hunters and Lyra is kidnapped and taken to 'the Experimental Station' (Bolvangar) where Lyra joins the other missing children. There she is tested and attends school-like instruction, whilst doctors look on and examine the relationship between the children and their dæmons. She is also here reunited with Roger and learns more about the intercision process. Mrs Coulter soon arrives but Lyra keeps a low profile and lies about her name and personality. Then, using the fire alarm as a distraction, and with the help of Kaisa, Lyra opens a storage unit where severed dæmons are being kept caged and releases them to their deaths.

Lyra then eavesdrops on a conversation between Mrs Coulter and the Bolvangar doctors and discovers that they have created a new separation device in the form of a guillotine. Alone, the doctors discuss Mrs Coulter before discovering Lyra and deciding to test the new device on her and Pantalaimon. Before the guillotine comes down, however, Mrs Coulter returns and rescues her in horror, where they retire to her chambers and discuss everything. Eventually, Mrs Coulter asks about the alethiometer and Lyra hands her the tin containing the spy-fly. Mrs Coulter, thinking it to be the alethiometer, greedily opens it but it attacked by the spy-fly. Lyra then runs, sets off the fire alarm, and escapes into the snow with the rest of the children.

Out in the snow, the children face off with the Tartar guards and the doctors attempting to detain them, and are rescued by Serafina Pekkala's clan of witches as well as Iorek Byrnison. The children, running on, soon get fractious and cold and Lyra worries that the gyptians will not arrive in time to rescue them. Before long, however, they arrive and the children are saved. As a blizzard begins to rage, Lyra and Roger are attacked by the Golden Monkey and Mrs Coulter, but Serafina Pekkala lifts them up into Lee Scoresby's balloon and away, where they begin their flight to Svalbard.

Part three, 'Svalbard', begins with a long conversation between Lee and Serafina, before the balloon is attacked by cliff-ghasts and Lyra falls out into the snow. She is discovered by the Armoured Bears and taken hostage at their Palace, where, in the cell, she meets Jotham Santelia, a mad old professor who tells her about the new king of the Bears, Iofur Raknison, and Lyra learns that he wants to rule like a human, with a dæmon. She then gets free of the prison by tricking the bears (a feat not easily done as shown earlier in the story when Lyra fences with Iorek) and tells the king that she is Iorek Byrnison's dæmon, come to request he fight to the death — and whoever wins shall own her as dæmon and be the true King of Svalbard. The bears fight, but Iorek, understanding that as Iofur is no longer acting like a bear, he might be tricked, feigns a broken paw and then clubs Iofur to death, ripping off his entire lower jaw. Iorek removes the human conventions that Iofur had been enforcing and becomes King once again, giving Lyra the name 'Silvertongue' for her capacity for lying.

In the last section of the story, Iorek takes Lyra and Roger to where the Bears had been keeping the exiled Lord Asriel. There, Asriel expresses confusion at Lyra's arrival, but, half-mad from isolation, he steals Roger away and takes him to a remote ice-shelf where he hooks him up to a number of scientific instruments and then severs Roger's dæmon, killing them in the process. This creates a blast of energy that blasts apart the fabric of the world and opens a huge window to the city of the new world. In the final moment, Mrs Coulter appears, reunited with Asriel and Lyra, but Asriel goes into the new world and Mrs Coulter retreats. Lyra and Pantalaimon vow to understand Dust and so they turn 'away from the world they were born in, and looked towards the sun, and walked into the sky.'

The book was adapted into a film under the US name The Golden Compass. The film was released on 5 December, 2007 in UK and on 7 December in the US. Chris Weitz was the Director and Dakota Blue Richards, Nicole Kidman and Daniel Craig starred in the film.

In 2005, the 10th anniversary of His Dark Materials, Scholastic released hardcover editions of the trilogy that included extra notes to accompany the series written by Philip Pullman himself. These were called 'Lantern Slides'.[3]

The Golden Compass paperback cover published May 22nd 2001 by Yearling 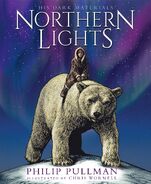 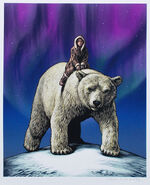