His Dark Materials
Register
Don't have an account?
Sign In
Advertisement
in: Females, Humans, Scholars,
and 2 more
English

Astrophysicist/Neuropsychologist
Dr Mary Malone was an astrophysicist and neuropsychologist who was investigating how dark matter affects human consciousness. She was told she must play the role of the serpent for the second Adam and Eve.

When Mary was twelve, she went to a friend's birthday. Here, she met a boy called Tim and they danced together. Later, he gently placed a piece of marzipan in her mouth, and the taste would always remind her of this moment when she fell in love for the first time. Soon after, they shared their first kiss.[4]

Malone became a nun at some point during her university career. She believed that she could study astrophysics and neuropsychology to the glory of God and since her convent was not strict, she was allowed to complete her doctorate. She was asked to present her paper at a conference in Lisbon, Portugal on the 9 August 1990. The next day, she went out for dinner with fellow academics from the conference, and she met Alfredo Montale. That night, at 9:30pm, she ate a piece of marzipan which brought back the memories of falling in love, and caused her to question her faith. Malone and Montale went for a walk on the beach together, and she threw her crucifix into the sea, having made up her mind. She also admitted that she kissed Montale at some point. [4]

Malone chose to leave her life as a nun, which greatly disappointed the Mother Superior, the priests and her parents. Her relationship with Montale did not last.[4] After leaving the convent, Malone moved to Oxford.[5] Her next relationship was with a man who enjoyed rock-climbing. They lived together for four years, but eventually separated.[4] Mary went on various other expeditions after leaving and she went to California once.[6]

Malone worked at the Oxford University as part of the Dark Matter Research group. With her colleague Oliver Payne, she studied the particles which they called Shadows, also known as Dust.[3]

One day, Lyra Silvertongue, a girl from another world, came to her laboratory. Malone was amazed by her ability to communicate with Dust via the alethiometer and then with the computer developed by the research group, called the Cave. On Lyra's advice, Mary wrote a programme which allowed her to communicate with Dust by typing questions into the computer. The Dust told Mary she would have to "play the serpent", and that she should destroy the computer and then leave for another world through the window on Sunderland Avenue. After deceiving the guard by saying she was a member of the Department of Physical Sciences.

Mary travelled through the world of Cittàgazze and found a window into the mulefa world. By communicating with Dust via I Ching, she learnt that she must stay with the mulefa. She learnt their language and compiled a dictionary. She also involved herself in their customs such as net-making and grooming each other. She helped out with village life by mending roofs as the mulefa are unable to climb, and gathering mussel-like creatures for food, as the mulefa did not like to get their wheels wet.

Mary's major breakthrough was the amber spyglass. She created it from two pieces of lacquer which she covered with a layer of wheel-tree oil. By holding the two sheets a certain distance apart, she was able to see Dust. The mulefa took the pieces and turned them into a spyglass with a piece of bamboo of the appropriate length.

Once Mary was able to understand the language of the mulefa and to see Dust, an elder zalif named Sattamax asked her to investigate why the wheel trees were dying. She made a harness and climbed to the top of a wheel-tree and Malone discovered that Dust was moving away from the world at an alarming rate, but did not know how to stop it.

When Will Parry and Lyra Silvertongue arrived in the mulefa world, the time for Mary to play the serpent arrived. She told them about her experiences of falling in love, which planted the seed in their minds. When Will and Lyra kissed, Mary noticed that the Dust had stopped rushing away from the world, and was instead floating downwards, pollinating the wheel trees.

Serafina Pekkala came to Mary and told her that the gyptians would arrive in two days. Mary told Serafina what she knew about Dust and let the witch use the Amber Spyglass to see it. Serafina told Mary that her dæmon was an Alpine Chough.[7] Ahead of Mary's departure, Serafina taught her to see her dæmon by simultaneously holding the state of mind she used to speak to the Shadows with the Cave and seeing ordinarily. With practice at holding her concentration, it became easier for her.[8]

Before Mary returned to her own world, Atal gave her a bag of wheel-tree seeds and a phial of wheel-tree oil.[8] She gave three of the seeds to a scientist at the Botanic Garden. They grew well, but she always refused to say where they came from.[9]

Mary agreed to help Will get his mother treatment for her illness and offered him a place to stay so he would not be put into care.[8]

Mary had short black hair and red cheeks. Lyra guessed that she was in her late thirties as she seemed a little older than Mrs Coulter.[3] She tended to dress simply and practically. She was stocky in build but physically fit and capable of surviving outdoors having taken camping trips taken in Scotland and the Alps.[10][11] Mary had experience in both rock-climbing and had heard about techniques that tree climbers used which came in handy in the mulefa world.[12] 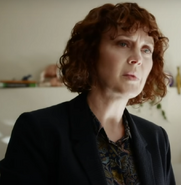 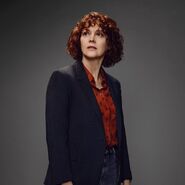