His Dark Materials
Register
Don't have an account?
Sign In
Advertisement
in: Deceased, Explorers, Humans,
and 3 more
English

Fell into the Abyss

"Lord Asriel was a tall man with powerful shoulders, a fierce dark face, and eyes that seemed to flash and glitter with savage laughter. It was a face to be dominated by, or to fight: never a face to patronize or pity. All his movements were large and perfectly balanced, like those of a wild animal, and when he appeared in a room like this, he seemed a wild animal held in a cage too small for it."
—Lyra Silvertongue describes Lord Asriel[src]

Lord Asriel was Lyra Silvertongue's father, and a powerful man who wished to destroy the kingdom of the Authority and replace it with the Republic of Heaven. His dæmon, Stelmaria, had the form of a snow leopard.

In Asriel's adulthood he was a sitting member of the Brytish Parliament, where he defeated the Watercourse Bill. He also saved a man named Sam Broekman from a person of Turkish descent.[3]

In 1953 there were floods in the Fens. Asriel saved the life of two gyptian children: Ruud and Nellie Koopman by diving into the water.[3]

Lord Asriel was a highly respected member of the Brytish aristocracy. He was an explorer and did work in experimental theology, through which he acquired much power, land, and money. This all changed when he had an affair with Marisa Coulter which resulted in a child in 1985. Asriel hid the child in one of his own estates, trusting her to Ma Costa and Marisa pretended the baby had died.

However, Marisa's husband, Edward Coulter, came after Asriel. He upturned the cottage looking for the baby before starting towards the main estate. Just as he was about to open the closet where Ma Costa was hiding with Lyra, Asriel challenged Edward to a duel. Edward had a gun which he shot, missing, Asriel took it off him before turning it on Edward, shooting and killing him. However, as a consequence, Asriel was taken to court and subsequently lost most of his money and property and, along with it, his power for killing a man as, even in self defence, Edward was revenging his wife.

With these events, she was abandoned by her mother and her father wasn't allowed to go within 50 miles of her and so Lyra was eventually sent to a convent by the court,[4] however, since Asriel despised the Holy Church, he would take Lyra to Jordan College with him instead in 1986. Malcolm Polstead, who worked at The Trout Inn, opposite to the priory in which Lyra was being kept, took Lyra in his canoe to Lord Asriel who was in London during the floods.[1] At Jordan, she was raised by Lord Asriel as his niece.

First expedition to the North[]

Asriel, pretending to go and visit the King of Lapland, went on an expedition to the North in which he took photograms of Dust and of Cittàgazze, a city in another world, seen through the Aurora. It would be here where he would also meet the explorer known as Stanislaus Grumman.

When he returned to his alma mater to present his findings to his fellow scholars at Jordan in the Retiring Room, Dr Carne, the Master of Jordan College, attempted to kill him by poisoning a bottle of Tokay when no one was around. Lyra, who ended up hiding in the wardrobe in the room to avoid getting caught while exploring, saved Asriel's life by warning him not to drink it. Asriel ordered Lyra to go back into the wardrobe, presented his findings to the scholars, including showing them what they took as Stanislaus's skull. He asked the scholars for money and, after being shocked by his photograms of Dust and of the Aurora, they granted him the funds.

Second expedition to the North[]

Having acquired the necessary funds for his expedition, Asriel departed immediately. He travelled to Svalbard but was imprisoned by Iofur Raknison and the panserbjørne on the orders of the General Oblation Board, mainly Marisa. Despite being imprisoned, Asriel was able to obtain everything he required in order to create a window to another world by bribing the king bear with money. Asriel was about to choose where he wanted his imprisonment house to be, and how he wanted it designed. He was given coal-spirit by the bears and, claiming he was entitled to it, could have visitors come and visit him to bring him gifts and was even allowed to keep his servant, Thorold. He was able to trick the bear.

However, to complete his experiment and open the gateway into the world in the Aurora he would need a child. If he performed intercision, a huge, powerful burst of anbaricity would be produced when the human and dæmon split which he intended to harness and to rip open the barrier between the worlds with.

Bridge to the stars[]

""Get out!" Lord Asriel cried. "Turn round, get out, go! I did not send for you!""
—Lord Asriel to Lyra when he first saw her in Svalbard.[src]

When his own daughter, Lyra, came to his house, Asriel was shocked that the fates would make him sacrifice his own daughter, and told her to go away just before he saw the boy she was with, Roger Parslow who had been rescued from Bolvangar. Asriel fed, bathed and sheltered them before sending the boy to bed and taking Lyra into the library to talk about Dust, the Bible and Bolvangar before sending Lyra to bed.[5]

Asriel then packed his equipment into a sledge, not leaving any orders for Thorold, and took Roger up a nearby mountain, unaware that Lyra and Marisa were following him. Asriel set up all of his equipment, leaving Roger's dæmon, Salcilia, in the mouth of Stelmaria, preventing Roger from escaping. Just as Asriel was ready to perform intercision, Lyra rushed down to where they were and helped Roger and Salcilia free. Just before they were able to fully escape, Stelmaria caught Salcilia in her mouth again and Asriel performed intercision, ripping open the gateway between the worlds and leaving Roger dead.

Marisa, who had reached the spot where Asriel was, began talking to him about what he was going to do. Asriel invited Marisa to go with him, find the source of Dust and stop it, tempting her and telling her how powerful they would be together, whilst holding and kissing her. Marisa ended in refusing his offer, although it wasn't an easy choice, and went down the mountain.

Asriel, without a second thought, strode into the world of Cittàgazze leaving Lyra to follow behind him.[6]

Allying himself with Xaphania and the rebel angels, Asriel constructed a basalt fortress in another world and began to gather an army from many worlds. He was the lover of Ruta Skadi, queen of the Lake Lubana clan of witches, who rallied many witch clans to his cause.

Later, he had his friend King Ogunwe and Lord Roke of the Gallivespians attempt to find Lyra, the second Eve. They captured Marisa Coulter, who had been keeping the girl hostage, but Lyra escaped with Will Parry and two of Lord Roke's agents. Lord Asriel then attended to Marisa and tried to influence Lyra and Will, as they held the key to renewing the Dust flow. Lord Asriel allowed Marisa to escape in an intention craft and had Lord Roke follow her to gain information from the Consistorial Court of Discipline. They found that the Church had made a bomb to kill Lyra. Lord Asriel rescued Mrs Coulter just in time, as well as destroying Saint-Jean-les-Eaux a moment too late with his intention craft.

Lord Asriel had black hair and black eyes.[1] He was tall and powerfully built, his movements reflecting his intimidating presence. Lyra considered his voice to be harsh[2]

This article is a stub. You can help His Dark Materials by expanding it or contributing to the discussion.

Asriel had a way of dominating a situation of place, with his immense power and knowledge. He was able to trick and persuade Iofur Raknison showing he could influence and was very clever, being able to trick a bear.

Lord Asriel, being able to calculate the power it would take to open the gateway between the worlds, showed he was extremely intelligent. 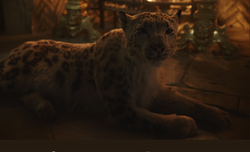 Stelmaria was quiet, strong, and highly intelligent. She had piercing green eyes. Her dominance of Roger Parslow's dæmon, Salcilia, was crucial to Asriel's success in breaking through the aurora to Cittàgazze, and her strength was further demonstrated in the final battle with Metatron where both she and her human, along with Marisa Coulter and her dæmon, met their ends in the Abyss.

Asriel's relationship with Lyra was patchy, especially after he murdered her best friend Roger. Asriel would rarely visit and see Lyra at Jordan, but the fact that he moved Lyra to Jordan College, was horrified when he thought he would have to murder Lyra instead of Roger and then threw himself down the Abyss to save Lyra shows that he cared for her.

Asriel and Marisa fell in love when they first met, which was unfortunate as Marisa was already married to Edward Coulter. They started an affair and conceived Lyra, which led to Asriel murdering Edward. After this, Asriel was stripped of much of his influence and wealth. Marisa moved to start a life in the Church whilst Asriel's research conversely went against the Church, and they parted ways. They reconnected briefly in the North after Asriel opened the rift between worlds - Asriel urged Marisa to join him travelling to the world of Cittàgazze, but cautioned her he wouldn't spare a moment thinking about her if she didn't go. Marisa declined, although not without sadness.

They were reunited briefly in the basalt fortress, where Marisa was Asriel's prisoner, although he made considerable concessions towards her. This led to Marisa stealing Asriel's intention craft to spy on the Magisterium. Once rescued again by Asriel, she headed to the Clouded Mountain to attempt to deceive the angel Metatron, who wanted to murder Lyra. They both united for the last time to jointly drag Metatron into the Abyss as their final act, sacrificing themselves for their daughter and for the many worlds, after declaring their feelings for each other once more.

In spite of Asriel's ruthless, ambitious nature, he adored his dæmon Stelmaria and had a strong bond with her.

HDM Wiki has 12 images of Stelmaria.

This article is a stub. You can help His Dark Materials by expanding it or contributing to the discussion.
Deutsch Español Français Italiano Português do Brasil Русский
Community content is available under CC-BY-SA unless otherwise noted.
Advertisement