His Dark Materials is a British fantasy drama television series commissioned by the BBC as an adaptation of the eponymous trilogy of novels of the same name by Philip Pullman.

Series 1, written by Jack Thorne and spanning 8 episodes, was announced in 2015 and first aired on 3 November 2019 on BBC One and internationally on HBO from 4 November. Series 2 was commissioned before Series 1 had begun airing and, despite the COVID-19 pandemic, aired in the UK from 8 November 2020 and internationally from 16 November 2020. A third series has been commissioned by the BBC with filming beginning in 2021.[2]

His Dark Materials is a drama series and is set in parallel worlds, following the story of Lyra Belacqua and her dæmon Pantalaimon, William Parry, and other characters of various species. It has been rated as TV-14 in the US.[3]

Series 1 is based upon the events of Northern Lights and follows the story of Lyra Belacqua on her quest in search of her missing friend, Roger Parslow, where she encounters witches, Panserbjørne like Iorek Byrnison, gyptians, and aëronauts whilst finding out about Dust. It introduces Will Parry and the troubles his mother has been having since his father disappeared years before.

Series 2 is based upon the events of The Subtle Knife and follows Lyra and Will in Cittàgazze as they explore the deserted city and go in search of the subtle knife. It shows Mary Malone, Lee Scoresby, and John Parry as they help the children.

Series 3 will be based upon the events of The Amber Spyglass.

After the success of The Lord of the Rings film trilogy, the His Dark Materials books, which were published between 1995 and 2000, were optioned. This led to the development of the 2007 film, The Golden Compass. However, the film removed some of the key areas of the book, like references to religion and the Holy Church, which Chris Weitz (director of the film) blamed for the shortcomings. Moreover, the Catholic Church called for a boycott; Sam Elliott (who played Lee Scoresby) blamed the Church for forcing the cancellations of the sequels, while some believed poor reviews may have been the reason.

Philip Pullman, in a 2012 interview for Mother Jones, was interested in giving His Dark Materials another shot, this time as a television series.[5] The BBC, in November 2015, publicly announced plans to adapt the book series into a television series in association with Bad Wolf and New Line Cinema (with HBO joining later). Pullman was named the series' executive producer along with Deborah Forte.[1]

Pre-production was originally planned for autumn 2016, with the project announced in 2015, but casting was only in the process of finalisation in early 2018.[6] The show was originally said to cover 5 series but it was later confirmed that each series would cover one book.[7]

The first series was filmed mainly in the UK (Cardiff and Oxford) and the Arctic (although the cast never filmed there).[6] On 14 December 2018, it was announced via Twitter that filming for the first series had wrapped.[8]

Series 2 began filming in June 2019 at various locations across the UK[9] although filming officially began during the week of the 29th July with filming going on for five months until just before Christmas.[10] However, only seven out of the eight episodes were filmed before lockdown was imposed in the UK[11] and the eighth episode (a standalone episode about Lord Asriel) which was filmed in March 2020 was not completed before work on TV productions was halted due to the pandemic. Despite the loss of this episode and it being announced that James McAvoy would not be returning in the series, a small scene (which would have featured at the end of the 'lost' episode) was filmed after lockdown and added in.[12]

On 22 December 2020 (two days after the Series 2 finale), the BBC announced that they had commissioned a third and final series to adapt The Amber Spyglass. Filming will begin in 2021.[2]

The first teaser of the first series was released by the BBC on 24 February 2019 with subsequent trailers following on 17th May, 19th July (part of the San Diego Comic Con panel), 25th August, 3rd October, and the final one on 21st October. Short clips from each episode was uploaded onto the BBC Programmes website prior to its broadcast.

On 18 July, 2019, the show hosted a panel at San Diego Comic Con where an Autumn 2019 release date for Series 1 was announced and an extended trailer revealed.[13] A preview of the show in London was premiered by the BFI on 15 October 2019[14] and another in Cardiff the following day.

The first series was split into episodes of 8 each roughly an hour long. The first episode, Lyra's Jordan, aired on 3 November 2019 in the UK on BBC One and 4 November internationally; however Dafne Keen's mother revealed in August 2019 on Instagram (since deleted) that the release would be on 3 November. The series aired (in the UK) exactly four years after the production for the show was planned.[15]

The show aired normally at 8pm GMT in the UK and 9pm ET in the US. The earlier UK slot, rather than the typical 9pm slot for Sunday night dramas, allowed younger children the chance to watch it live.[16] The only exception to this was the seventh episode (The Fight to the Death) which began an hour later in the UK due to the live event 'BBC Sports Personality of the Year', this was later pushed back again to 9:10 because the event ran over.[17]

An early preview of the sixth episode, The Daemon-Cages, took place at Mayfair Theatre with the Royal Television Society, three days prior to its broadcast on the BBC. All episodes from Series 1 were released onto BBC iPlayer following their broadcast (originally until 21 June 2020 however, upon this date, their availability was extended indefinitely). All episodes are available in UHD.

Following the full series broadcast, a rewatch of the first episode was staged on 26 April 2020 where various members of the cast and crew posted details about the series. Just after the rewatch, the programme Making His Dark Materials was released onto BBC iPlayer and showed the making of the series.

On 9 July 2020 (the 25th anniversary of the original publication of Northern Lights), mirroring the previous year, it was announced that the show would host another panel at Comic Con on 23 July, although this time remotely due to the COVID-19 pandemic. The first full trailer for the second series was released at this time.[18] At the panel, it was revealed that one of the standalone episodes in the second series had not been completed and would not air leaving the series with only 7 episodes. On 28th August, in a BBC trailer, it was announced that the show would air in November.

On 12 October, it was confirmed that the series would be aired by HBO on 16 November. On 24 October, a small trailer and featurette was released by the BBC which announced that the UK release date would be 8 November, over a week before the US. A preview of the first episode took place at BFI Southbank on 2 November.[19]

Region 2 DVD and Blu-ray copies of the second series were posted on Amazon UK shortly before the second series was due to start and were published on 28 December 2020.[23][24] Unlike Series 1, a steelbook was not produced for Series 2. Both copies included all seven episodes, four art cards, and a number of non-exclusive bonus materials: Making His Dark Materials, The Subtle Knife, Lyra, The Powerful Mrs Coulter. These spanned three discs.

At the same time as the Series 2 DVD/Blu-ray were announced, a Series 1 & 2 boxset was also announced in both DVD and Blu-ray for release on the same date.[25][26] These included all the bonus features on the Series 1/2 DVDs.

A Region 1 DVD and Blu-ray were announced on 14 May 2020 for a release date on 4 August 2020 by Warner Bros. Home Entertainment. Split over two discs, there were: the eight episodes, interviews with the cast and four of the Region 2 bonus features as well as the exclusive Making His Dark Materials programme.[27] A Region 1 DVD and Blu-ray for Series 2 were released on 29 June 2021.[28]

On 27 November 2020, a dedicated His Dark Materials merchandise shop was set up for the TV series selling a variety of t-shirts and posters.[33][34]. This was later updated to include hoodies, sweatshirts, and hats. A wider variety of products (including mugs, and notebooks) will be added later.[35] 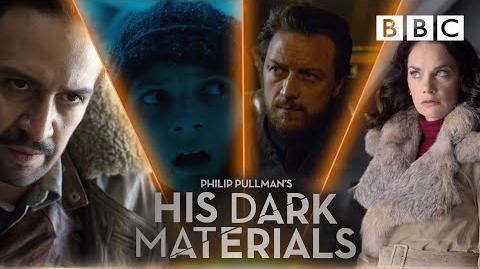 HDM Wiki has 250 images from His Dark Materials (TV series).