Angelica was a young girl who lived in the city of Cittàgazze.

Angelica and her young brother, Paolo, lived in Cittàgazze with their parents. When Lord Asriel ripped a window between his world and the world of Cittàgazze, the city was flooded with fog and the family fled to the hills. After the fog cleared, the city was filled with Spectres; creatures interlinked with Dust that could steal the soul of an adult but were harmless (and invisible) to children. The children returned to Cittàgazze to run riot while their parents remained in the hills.[1]

Angelica and her brother were the first people Lyra Silvertongue and Will Parry met in the world of Cittàgazze as they were the first children to come down from the hills. The siblings talked to the two strangers and told them a bit about the city, including the mysterious Torre degli Angeli. During the conversation, Paolo accidentally revealed the existence of his older brother, Tullio, to the two outsider children and hinted that he may be at the Tower, which made Angelica slap him.[1]

The following evening, the children of Cittàgazze spied a cat, which was considered bad luck in Cittàgazze, and began throwing stones at it. When Will and Lyra saw them, Will threw a boy to the ground, rescuing the cat. Angelica told them that they weren't like the children as they weren't from the city and didn't know about cats or Spectres.

Later, Will and Lyra were directed to the Torre degli Angeli by Charles Latrom, who wanted them to retrieve him the Subtle Knife in exchange for him returning Lyra's stolen Alethiometer. In the tower, the children spied Tullio with the knife, waving it around in odd manner. They then came across a bruised and beaten man, Giacomo Paradisi, who was the true Knife Bearer. Paradisi told the pair that Tullio had stolen the knife, but would never be able to use it. Will fought Tullio on the roof of the tower, and won, gaining possession of the knife. Defeated, Tullio ran out of the tower. The Spectres in the city immediately flocked to him as he had gone through puberty and was vulnerable to them. Whilst Tullio began counting the bricks in a wall in a desperate attempt to ignore and prevent what was happening to him, his siblings began snatching at the air and grabbing their brother to try and save him. Their attempts were in vain as Tullio's soul was eaten by the Spectres.

Lyra was witness to this event from the tower. When Angelica looked up, they locked eyes and Paolo said that the children were going to kill Lyra and Will.[2] Meanwhile, Paradisi told Will he was the new bearer and taught him to use the knife, before dismissing them both and committing suicide. The following day, Angelica, Paolo and the boy that Will had pushed to the ground to rescue the cat rallied the other forty or fifty children to attack the pair and reclaim the knife, chasing them from the white villa, where they were staying, to the Belvedere tower. After the staircase inside was cut by Will, the group began to climb onto the roof. When Lyra knocked a boy in the side with a bar from the rail, Angelica scrambled up to take his place. The mob was eventually stopped by the appearance of Serafina Pekkala's dæmon, Kaisa, and other witches as the children ran away in fear.[3]

Later, Paolo and Angelica gave information about Mary Malone, Will and Lyra to Father Gomez. She also told him how Will and Lyra stole the subtle knife and killed her brother, saying it would be fine for him to kill them both.[4] 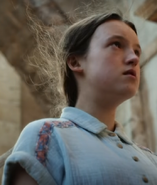 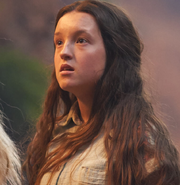 HDM Wiki has 2 images of Angelica.