His Dark Materials
Register
Don't have an account?
Sign In
Advertisement
in: Objects, Methods of communicating with Dust
English

"It was very like a clock, or a compass, for there were hands pointing to places around the dial, but instead of the hours or the points of the compass there were several little pictures, each of them painted with the finest and slenderest sable brush."
—Description of the alethiometer[src]

The alethiometer, nicknamed the symbol-reader, was a compass-like device that was used to communicate with Dust and find truthful answers to one's questions. Only six alethiometers were ever made.[1] 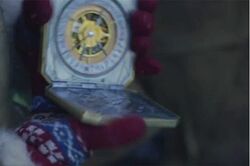 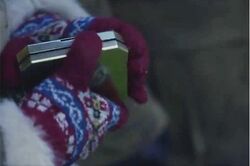 The name of the object comes from the Greek aletheia (truth) and meter (measure).

The alethiometer was invented by Pavel Khunrath in Prague in the 17th century. It was intended to be used for astrological purposes, such as measuring the influences of the planets.[2] The experimental theologian discovered that an alloy of two particular rare metals could be used to create a needle that pointed towards the truth. The first alethiometer consisted of this needle suspended over a celestial chart showing the signs of the zodiac, with Khunrath asking questions and receiving responses.

Khunrath later improved the alethiometer by using symbols from the memory-theatre to give himself a wider array of icons to draw upon. As his research went on, he realised that the meanings of the symbols already existed and that he discovered them rather than inventing them.

When Emperor Rudolf II died in 1612 and Emperor Frederick succeeded him, research deemed occult was outlawed. Khunrath was burnt at the stake for heresy in the name of the Magisterium, but some of his instruments and notes survived. Scholars in more tolerant countries continued his work, naming his device the alethiometer.[3]

Reading an alethiometer required particular skill, training, and a lot of studying and reading. Although Lyra Silvertongue was able to do so intuitively in her youth, after puberty she had to relearn how to do it. Most scholars made use of reference books in order to decipher the meanings of the alethiometer's 36 symbols. The Bodleian Library in Oxford had such literature.[4][5]

To read the alethiometer, the user first directed three needles to lie over certain symbols on the face of device to create a question. Then, the user held this question in their mind, without grasping at the answer, but being content not to know - meaning an alethiometer could only answer questions a reader didn't earnestly want the answer to. At this point, the fourth needle swung into action, moving from one symbol to another to create the answer.

After Lyra's voyage to other worlds, Olivier Bonneville, who worked for the Magisterium, pioneered a new method of reading. Rather than framing a question with a stable triangle, all three hands were pointed at a single symbol, the single anchor then providing a rapid, unpredictable way of reading when the user relaxed and 'floated away' with their viewpoint in constant flux. This unorthodox method was much discussed among scholars and many viewed it as disrespectful and unstable.[6] By abandoning the stability of the single-viewpoint classical method, the reader was able to arrive at meanings faster and with far less reliance on the books.[7] However, this came at the cost of depth of understanding and the unfixed perspective inevitably made the reader violently sick.

Bonneville discovered that the method only worked in the 'present tense'; it could show events but not their causes and consequences. He also found that pills could somewhat mitigate against the sickness.[8] Bonneville later learnt that rose oil provided protection against the sickness and believed that enough of it could mitigate all ill effects.[9] No other alethiometrist could match him for speed or accuracy, as none had mastered the new method like he had. However, the new method was necessarily limited. It required shorter periods of use at longer intervals and was no good when depth of understanding was required.[10] The new method was drawn to a person's dæmon, which accounted for Bonneville's struggle to find Lyra when she was separated from Pantalaimon.[11]

As of 1986, Oakley Street knew of five alethiometers:

At that time, Oakley Street knew only rumours of the sixth alethiometer.[13] At that time it was in the possession of Gerard Bonneville, but it later belonged to Lyra Silvertongue.[14][15]

The alethiometer had thirty-six symbols, each of which had countless meanings. Each symbol has its own article detailing its meanings.

The poster folded up

Unfolded: "The History of the Alethiometer"

"How to Read the Alethiometer"

HDM Wiki has 24 images of alethiometers.